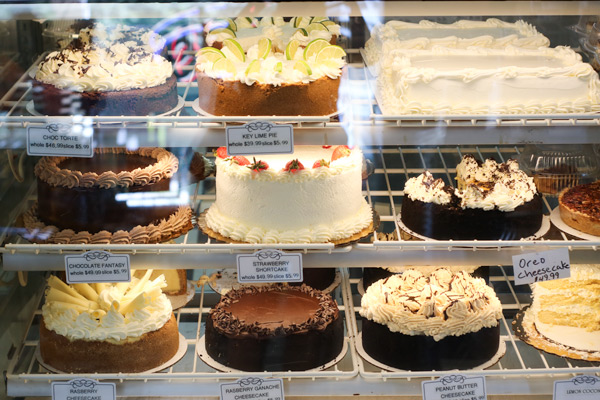 Lacy, coffee-colored cannolis, with creamy, chocolate-chip-dotted filling peeking out of each end. Cupcakes swirled high with buttercream under a shower of cookie crumbs. Artfully decorates cakes and pies, almost too pretty to eat. These were the first things to grab my attention walking into Tullio’s Bakery in Duck. The next was Dawn Amoruso with bright blue eyes and a pretty smile, busying herself behind the counter. She and her husband Tom have owned Tullio’s since 2003; Tom is the baker and when he and Dawn decided to move to the OBX from New York and purchase the bakery, he learned all he needed to know practically overnight from the previous owner.

At the time, Tullio’s was a small, two-case shop occupying a treehouse of a space upstairs in Duck’s Scarborough Faire. The Amoruso’s soon outgrew that setting and relocated to the Loblolly Pines shopping center, where they began expanding their selection of scratch made sweets to include everything a traditional New York bakery would feature.

Dawn said she wanted a place with baked goods that would remind people of home and their childhoods. They’ve accomplished that with classics like Italian sprinkle cookies and gorgeous cheesecakes in flavors like Raspberry Grenache with Oreo crust. They serve a breakfast menu complete with egg sandwiches and some pretty legendary cinnamon buns, turnovers, and danishes. By the time we line up in the morning to spoil ourselves on Tullio’s goodies, Tom will have already been in the kitchen baking, filling, and decorating them for 5 hours or more.

A private slice of heaven

Tullio’s is also famous for their uniquely designed wedding cakes – unsurprising, considering the stunning cakes and pies lining one full dessert case in the front of the shop. I was fortunate enough to score one of Tom’s fresh key lime pies to serve as dessert for family visiting from out of town. As expected, though, I had the pie home for about 10 minutes before I was tearing open the white cardboard box like a Christmas present and easing a tiny wedge out for myself. Some things are meant to be eaten in private. This pie, at least for one quiet bite or two, is one of them. The velvety key lime custard has just the right amount of pucker and that fruity tartness is smoothed out by a graham cracker crust that’s a few steps back from sugary and exactly satisfying. A dollop of thick whipped cream on top ties the flavors together like a period at the end of a sentence.

Making breads, pies, and pastries from scratch every day leads to a certain amount of leftovers. If our sun is shining too bright, calling folks to the beach instead of to the shops and not all of Tom and Dawn’s delicious items sell in a day, they donate them to homeless folks in need and send them off to round out meals for international students here working on J-1 Visas. A sweet way to avoid waste and help our community at the same time.

For me, I didn’t grow up in a town with anything resembling Tullio’s but we did have a Giant grocery store and my brother and I sure did coerce mom into buying us the black and white cookies: big as a paper plate, with a creamy, saccharine glaze of icing on top, black on one half, white on the other. My brother and I could be trusted to administer this treat ourselves- “the middle” already determined by the baker, leaving no need to argue over the definition of “half”. This taste memory is buried deep in my bones and the sight of Tullio’s classic black and white cookies put me, just as Dawn and Tom probably intended, right back in the navy blue leather seat of the family station wagon, on the way home from Giant, licking icing off my fingers and littering my lap with sugar cookie crumbs.

I’ll definitely be lining up at Tullio’s again soon for some sugary childhood memories, and a cookie or two on the side. Dawn’s words as she thanks you for coming to the bakery are, “Have a sweet day!” Easy to do when your morning begins at Tullio’s.