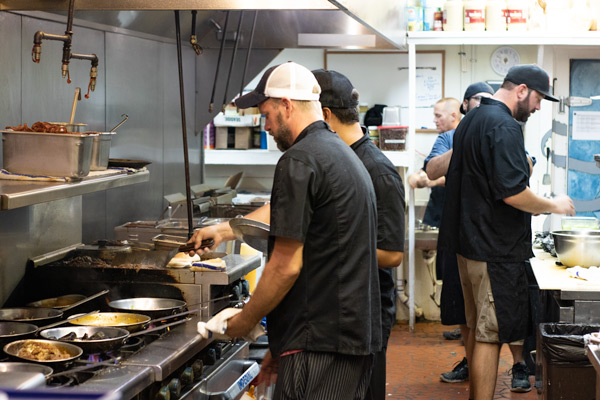 At 8pm on a hazy summer night in Nags Head, you may find the bartenders and servers at Blue Moon Beach Grill swaying along to Gladys Knight and The Pips as they fill drinks and pick up orders from the window. Enjoying the casual, lively vibe, my husband and I shimmied into our seats at the crowded bar for dinner. We sat perusing the menu and my attention gradually turned to the hustle and controlled enthusiasm in the open kitchen. Watching Chef Nate Robinson and his crew in constant motion, artfully plating the night’s seafood specials and other fare, sending it on its way to a packed dining room, I had the distinct feeling that there are no wrong choices on the menu at this place. And no better place to relax and have a good time.

The day before, I’d talked with Marketing Director and Assistant General Manager, Cara Godwin. We chattered on about the restaurant’s 10-year history on the beach, how her brother Scott Shields and his wife, Melissa, and their parents opened the grill with a cautious optimism, hoping for the loyal following and continued growth that is a reality today. They are open year-round and brighten up our chilly, hushed winter months with specials and tasty events like beer and wine pairing dinners. The staff, judging by the laughter and affability, can’t seem to hide the fact that they truly enjoy working here. Cara described how the chefs and servers love the summer for its busy smoothness but also look forward to the off-season when they can afford to linger more over each plate and table, not paying so much mind to the ticking clock. Of course, Cara and I also talked about the food at Blue Moon. I’d already heard rumors about the Caesar salad, brimming with bacon and caramelized onions – can’t go wrong with that. Along with the Mahi BLT, the Shrimp & Grits, and the Cheesesteak (a suggestion co-signed by a chef friend of ours who has eaten everything good on this beach), Cara also advised me that the specials are always a winning choice. They’re dreamt up on the spot once the fresh seafood arrives each day. I love eating something I know was on the chef’s mind that day. That sort of inspired cooking, a genuine expression of another person on a plate, just always tastes better.

That being said, here my husband and I were, admiring our neighbors’ food, watching flames jump from skillets, and overhearing the bartender, Erin, thoughtfully ask a guest what his wife likes to drink so it would be there when she arrived. I decided this was not an “either/or” situation for me. I wanted it all. Mussels to start, the Fried Green Tomato and Shrimp Napoleon, the basket of boardwalk-style fries, plus we’d share the Seaside Bucatini.

My past affairs involving mussels now pale in comparison to this experience at Blue Moon. The Mussels Fromage Bleu were Prince Edward Island mussels, subtly sweet and musky, sitting in a shallow bath of lemony broth, slick with a touch of bacon fat rendered from the applewood smoked bacon that studded the dish. Entwined with the mussels were wilted greens and blue cheese, adding a pleasant funk and savoriness. And the bread… two generous shards of crusty bread, broiled to a buttery, cheesy crisp and flecked with fresh parsley. The bread is a necessary vehicle for the remaining broth but it could stand on its own as a private, cheesy snack.
Our bartender and server, Kristin, swiftly emptied our bowl of spent mussel shells, carrying on easy conversation with us about beer trends and the beach before turning to pick up our other apps and entree. I caught a glimpse of that beloved cheesesteak headed to another table, so substantial that each end of the sandwich was peeking over the edge of the plate. Then, our plates and bowls of food arrived, each more enticing than the last.

French fries and I have a long-standing romance and they are underrated as an indication of the overall palette of the folks in the kitchen. People, like those at Blue Moon, who take the time to peel and cut the potatoes by hand and fry them to a perfectly crisp exterior, giving way to a fluffy, starchy interior, are doing it right. What drew me to the Fried Green Tomato and Shrimp Napoleon was my love of a cornmeal-fried crust contrasting with a summery, acidic green tomato and the Cajun cream sauce underneath – bright, rich, and a little smoky. This alone would have been enough to make anyone happy. What surprised me, though, was the skewer of spiced shrimp which were big and meaty and our favorite thing on the plate. It’s not easy to beat a fried green tomato as the best thing in a dish for me but these shrimp did it.

In between bites of French fries and Cajun cream sauce, we twirled fat strands of pasta around our forks and speared gorgeously tender artichoke halves, shrimp, and scallops from our bowl of Seaside Bucatini. The natural sweetness of the seafood was balanced out by an herby roasted tomato pesto and a salty dusting of parmesan which made me wonder why I’ve been wasting time with chicken in pesto sauce with pasta when shellfish is perfectly at home there. This refreshing twist on seafood pasta may have been the reason we were too full for dessert but it was worth every bite. After all, I think being too satisfied to enjoy a dessert is an honest compliment to a restaurant and chef. The pies and cakes at Blue Moon are homemade, though, and the Lemon Mascarpone Cake is already calling me back for a return visit.

When you go to Blue Moon Beach Grill, take a moment to read the windows, where they state, “Once in a Blue Moon, you get to taste life on a sandbar.” Relaxing into the evening at Blue Moon, eating food that quelled all my hungry cravings, surrounded by people genuinely having a good time at their jobs, was a sweet reminder that life really is deliciously good on this sandbar.